Solara’s story about her visit to Yucatan’s Dolphin Park 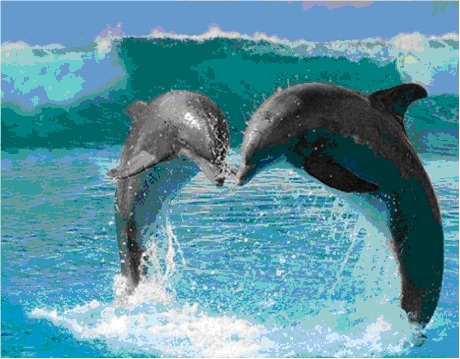 While in the Yucatan I felt compelled to go to a commercial dolphin park, without knowing why. I thought that perhaps as the dolphins were raised in captivity it wasn’t as cruel as dolphin lovers believed it to be — and I knew there would be a love exchange between any dolphins and myself when we met each other. In any event, I wasn’t expecting it to be traumatic!

The first thing which surprised me was that our phones and cameras were taken off us before we entered the pool area. I soon caught on that the official photographers were there to capture the whole thing, and that we were likely to be stung afterwards if we wanted any record of the experience.

As I entered the pool with 5 others, I was repulsed by the state of the water — it was literally like a warm ‘pot of piss!’ There were wavy lines which made the water murky and I instantly felt a wave of compassion for the creatures who lived there permanently, rather than in the huge beautiful ocean I had been swimming in every day.

We were immediately told exactly what to do and what not to do. To summarise — ‘Don’t take your life jackets off or swim. Don’t interact with the dolphins or make any moves you are not told to as this will confuse them. Most importantly, look at the camera when you are instructed.’ We were stood in a line, and one by one went through a 7 step process in which we made a certain hand gesture or body position in the water, which caused the dolphin to react in a certain way.

I was first in line for the first act, which was the dolphin ‘kiss’ pictured. It wasn’t a kiss at all — I was told to hold my hands forward one on top of the other, and the dolphin reacted by touching my cheek. ‘LOOK AT THE CAMERA AND SMILE!’ shouted the guide, which I obligingly did — and when I brought my one hand up to stroke the beautiful creature was instantly told off — ‘Don’t move your hands, you’ll confuse the dolphin!’

As I watched the other 5 go through the same routine I started to cry. I couldn’t believe what was happening! The strangest and most disturbing aspect for me was that the other 5 people didn’t find any of this puzzling or upsetting! Surely we could have just swum in the pool for 45 minutes and let the dolphins come to us if they wanted — wouldn’t this have been a much more meaningful and enjoyable experience for everyone? The poor guide was harassed as he was obliged to get these 6 people through the 7 step process of ‘Dolphin kiss, dolphin jump, dolphin ride,’ etc’ in a restricted time, while ensuring that the filming and photographs were good enough to make everyone want to buy the  $80 ‘package’ before they left!

I decided to stick it through to try and communicate with the 2 Star beings as much as I could in the time I was there. I streamed my unconditional love to them continuously and asked if they could communicate with me. They told me that they were in fact not so much unhappy as they were bored. They accepted their situation, but were frustrated that the humans who came to be with them were mostly so asleep that they didn’t even try to communicate. They said that they had chosen a life in the waters of Earth in order to assist humans wake up, but that most of the ones who visited weren’t willing to try.